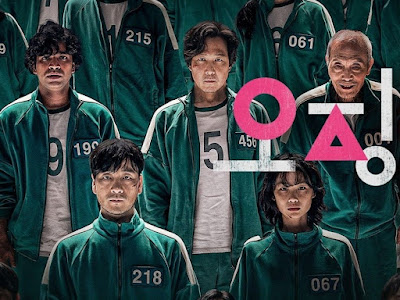 This September, many new Netflix series has been released and managed to entertain during a tiring routine. The South Korean series titled 'Squid Game' has become one of the most talked-about shows lately. I was finally interested in watching it, especially when people compared this series to 'Alice in Borderland' from Japan, which was popular last year. Come on, see my review for the following 'Squid Game' series!

Judging from the title and series, you must have guessed that 'Squid Game' is a series that is not far from a game. Yup, this series follows one of the main characters named Seong Gi Hun (Lee Jung Jae), experiencing economic problems. He is divorced from his wife and has one child. Gi Hun still lives with his only mother at a young age, earns money as a driver, and sometimes takes part in horse racing bets.

Even so, his efforts to make more money are not easy, coupled with his debt. Once upon a time, Gi Hun met a foreign man (Gong Yo) who offered him to play a childhood game with an offer of money. This meeting became the beginning for Gi Hun, who finally agreed to the request entirely.

It turned out that Gi Hun, in the isolation place, met 455 other participants. Some of these characters include a grandfather as participant number 1, Cho Sang Woo (Park Hae Soo), his childhood friend, Kang Sae Byeok (Ho Yeong Jung), and many more. 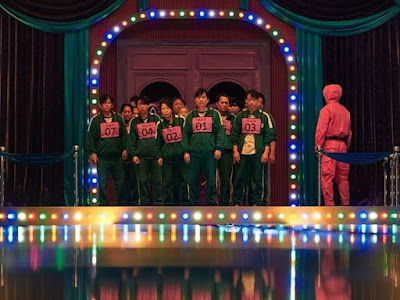 They have no clue what kind of games will be played and the total prizes awarded. When passing the first game, many participants did not continue because they sacrificed their own lives. But, after seeing the total amount of money that will be given, not a few of them changed their minds.

Playing childhood games with money or life at stake.

Since the opening scene in the first episode, this series has given clues by depicting the figures of Gi Hun and Sang Woo as children playing in the middle of the field. Sure enough, in each challenge, the participants were faced with a game from childhood. It may sound trivial, but when you know that the participant will be shot dead immediately when you fail, this childhood game no longer sounds trivial. 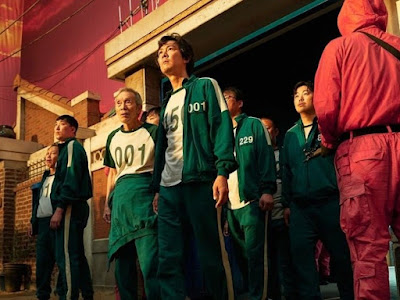 Each loss of life will contribute more money to the prize for the winner. Simply put, it's like betting on horse racing, only that the participants in the game are the horses. 7 rounds must be passed to find a winner in this fight and bring large total prize money.

While watching 'Squid Game,' to be honest, I also compared it a lot with the series 'Alice in Borderland.' I'm looking for the strengths and weaknesses. In fact, some of the concepts are also almost similar to the movie "Escape Plan" because the location is on the high seas, and the guards wear closed costumes.

In addition, this series also provides many touches of life drama that can relate to many people, ranging from economic problems to the family. In fact, the series directed by Hwang Dong-Hyuk several times managed to make me shed tears because there was a touching story in it.

Some people find the gameplay in this series too simple. Well, I agree, but that's not a problem because the audience can actually enjoy it more. Remember, while watching 'Alice in Borderland' I need time to think and can't afford to run a marathon, in contrast to 'Squid Game,' which I can watch and enjoy from episode one to the end at once. In my opinion, 'Squid Game' doesn't really need a futuristic feel like 'Alice in Borderland' because it uses a childhood game. Although having almost the same concept, each has its own strengths. 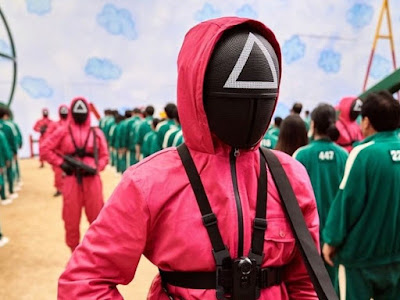 Apart from that, the 'Squid Game' series can be enjoyed, even if you are not familiar with shows with a survival game concept. The challenges that arise are easy to digest but still able to provoke emotional emotions. Oh yes, even though it looks quite classic, there are also plot twists in this series, you know!