-->
Home Tech The Meaning of the Symbols on the SD Card

The Meaning of the Symbols on the SD Card 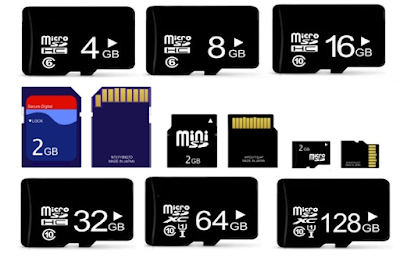 If we pay attention to the SD Card memory card in its body, there are many symbols. These symbols have their own meaning according to the SD card category. Such as dimensions, capacity, speed and interface, and other special uses are represented by symbols contained in the body of the SD Card.

This post tries to help understand the symbols contained in the body of the SD Card. This is useful if you want to buy an SD Card to suit your needs and can take advantage of the SD Card according to its features.

The symbols contained in the SD Card are determined by the SD Association, which manages and sets the Standard for SD Cards (Secure Digital Memory Card).

The following is an example of the symbols contained in the body of the SD Card.

In figure-1 above, the dimensions are denoted by the microSD symbol. SD Cards have three physical sizes or dimensions, each termed SD, miniSD, and microSD.

The other SD Card dimension symbols contained in the body look like the following image: 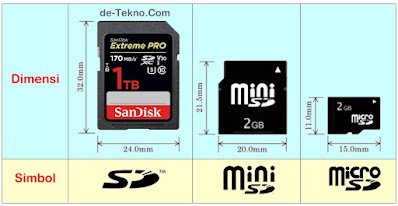 In figure-1 above, the capacity of the SD Card is denoted by the symbol XC (Extended Capacity). Besides XC, there are other symbols such as HC (High Capacity) and UC (Ultra Capacity). SD Cards on the market have several capacity ranges, namely:

The following is the symbol for the capacity of the SD Card: 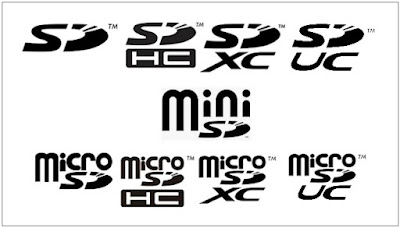 BUS Speed ​​is the term used to define the BUS speed of the SD Card interface. The size used is how many bytes can be transferred through the SD Card's bus interface per second.

In the picture above BUS Speed ​​is denoted by the symbol "I" which means the SD Card uses the UHS-I BUS Interface (Ultra High Speed ​​version 1) with data transfer speeds of 50MB/s (Full Duplex) and 104MB/s (Half-Duplex). . The details of the BUS Speed ​​SD Card are as follows:

This is the default speed of the SD Card bus interface up to 12.5 MB/s

Has a bus interface speed of up to 25 MB/s

Has speeds of up to 50 MB/s if data transfer uses the Full-Duplex method, or

Has speeds of up to 156 MB/s if data transfer uses the Full-Duplex method, or

Has speeds of up to 312 MB/s if data transfer uses the Full-Duplex method, or

The symbol is denoted by Roman letters I, II and III on the body of the SD Card to indicate the bus speed of the UHS-I, UHS-II and UHS-III interfaces. Default Speed ​​and High Speed ​​do not have a symbol. If there is no symbol, the SD Card uses a BUS Interface with a maximum transfer speed of 25 MB/s.

For SD Cards that use the PCIe BUS interface, there will be an Express or EX symbol as shown below:

This is the standard set by the SD Association to demonstrate the SD Card's capabilities in terms of video recording (Video Recording). If you have a hobby of recording videos, if you buy an SD Card, pay attention to these three symbols.

The value taken in the Speed ​​Class category is the data writing speed or the minimum read and write speed. Write speed is the lowest speed. Therefore minimum speed = write speed in SD Card.

This is the read and writes speed classification for SD Cards that do not yet use the UHS Interface. However, this symbol is still used in some SD cards even though they already use the UHS interface.

The Speed ​​Class has 5-speed levels. The symbol is denoted by the letter "C" with the numbers "2, 4, 6, 10" in the middle, indicating the data writing speed.

UHS Speed ​​Class has two-speed levels, namely U1 and U3. The symbol is represented by the letter "U" in the middle. There is the number "1" or "3" which indicates the minimum writing speed level.

In Figure-1 above, Video Speed ​​Class is symbolized by the symbol V30, which means that the SD Card can record videos up to 4K resolution.

Video Speed ​​Class is a memory card speed standard that indicates the minimum speed of data writing continuously (constantly) in connection with video recording (Video Recording). The symbol is denoted by the letter V accompanied by a number indicating the minimum data writing speed.

The Video Speed ​​Class has five minimum constant speed levels, each indicating the ability to record video resolution (4K or 8K). Consumers need to ensure that there will be no dropped (unrecorded) video frames when recording video.

There are 5 levels of video data writing speed, namely:

The three classifications above are summarized in the following table: 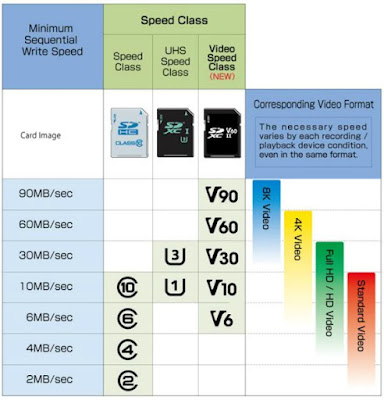 How to read the table above concerning video recording is as follows:

In figure-1 above, the Application Performance Class is represented by the symbol A2. The purpose of this classification is to show that the SD Card can be adopted as the internal memory of a cellphone if the cellphone has this feature.

The SD Association set this standard after Android 7 (Marshmallow) had a feature to adopt external memory as part of the internal memory. In other words, if the SD Card has the symbol A1 or A2, it means that the SD Card can be installed with applications!

So far, there are two Class Application Performance Classes, namely A1 and A2. The symbols written on the SD Card body are also the same, A1 and A2. The difference between A1 and A2 lies in the minimum speed of random read/write. In Class A2 there is flash memory management to make it more efficient.

Thus the article is about the types of SD Cards based on speed, size, and capacity. Hope it is functional. Don't forget to leave a comment below to share your experience with other visitors. Thank you.